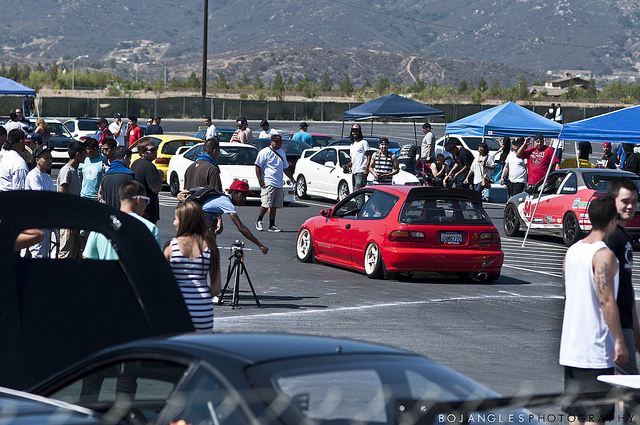 Eibach, one of the largest Honda gatherings here in the West coast that goes on once every year. I’ve been attending this event ever since 2008 when it was still back at the Eibach Factory in Corona, CA. Back then around that time I didn’t own a car but was really into Honda’s. There were some crazy builds at the time but now were in 2013 where there are a bunch of companies/ Brands that supply some crazy parts for swaps, conversions, and so on. Slammed cars and Stance has gotten bigger over the years but then there are those track built cars, and ones with rare parts from Japan and the UK. Over all it was a great event, I saw alot of awesome cars and unique builds! I was more interested in the track styled cars, and the USDM JDM inspired EF’s from Akebono and Weekend Playerz. Well onto Pt.1 out of 2!

My morning started off with meeting up with my friends who were showing at Eibach, we had a caravan from San Diego all the way up to Lake Elsinore. Since I was passenger I had a chance to snap some rolling shots.

On the way up we ran into Project Zero’s Caravan.

When we got there, there was a line of cars that were showing and spectators had to wait in line which was long but I bet it was moving quick.

We got in and parked the cars. After that I went out to snap some pictures of the cars rolling in to picture and see what people had brought out for eibach.

Checking out some cars around our area before it started to get filled up.

I love EP3’s and this one was amazing and it’s also RHD.

Love the wheels on this Integra.

This EK caught my eye with the wheel fitment.