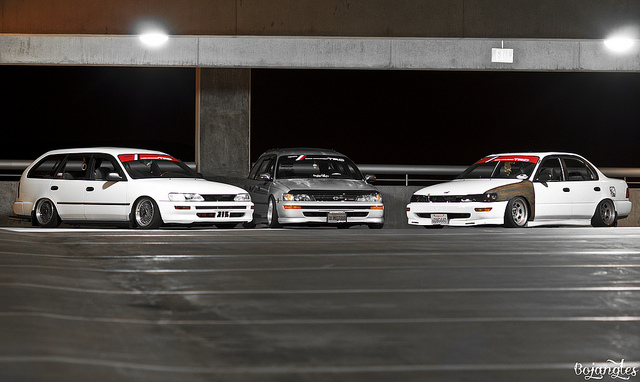 I haven’t drove my Corolla wagon in awhile ever since I put my Lexus together and got it registered and drivable. Did and oil change while the car was sitting there, after that I was ready to take it out for a drive. Jason (white wagon) was down in the area with Ian (white sedan) and wanted to see what I was up to, well we met up and decided to take some photos of our cars together. Crazy that there are other 7th gen corolla owners out there since this platform is rarely seen modified. We have a thing in common besides owning the same car, but after awhile we inherited some different types of the japanese car styling and just tried to make it work on our cars.

The day after the photoshoot Jason recieved his clear tail lights from Japan! Glad he picked up a set, which calls for an official photoshoot!

One thought on “Japan Inspired AE101’s”